DexMat carbon nanotube yarn is conductive, durable, flexible, and lightweight – so naturally, we are excited about its potential to be used in the emerging field of wearable electronics. Because our yarn can be handled like a textile thread, it can potentially be combined together with textile yarns to make clothing with complex electronic functionality without sacrificing comfort or weight. Additionally, because they have such a high surface area, our CNT yarns are excellent at interfacing electrically with the human body, whether that be through contact with body fluids or through “dry” contact with the skin. This means that they can potentially be used to make smart clothing that monitors the health of the wearer, or tracks movement and muscle contraction.

With the help of our friends at ZSK, we have made a capacitive touch sensor using DexMat CNT yarn. Check it out in the video below!

The demo consists of a patch of CNT yarn sewn into the backing fabric, with the tail end of that yarn connected to one of the input pins of an Arduino chip. The Arduino can be connected to a computer or other power source via a usb connection, and this connection provides that chip with a “ground” electrical voltage. Touching the CNT yarn with a fingertip shifts the voltage level of the connected input pin away from that ground level, and this triggers a pre-defined response (in this case, lighting up the Arduino LEDs and playing a sound). This works with a very light touch from the finger, and even works with just the single CNT yarn connecting the swatch to the chip – the additional surface area of the CNT yarn fabric patch wasn’t necessary for this particular case, but it also serves as a nice demonstration of how the yarn can be incorporated into a fabric!

The CNT yarn that was used to make this demo was our 200 micron HS yarn, but other yarn sizes should produce similar results. You can order CNT yarn and fiber in a variety of sizes from our online store at store.dexmat.com.

Tyson took a trip to the Class Axe Throwing range in Dallas, TX recently, so it seemed like the perfect time to make a follow-up to the recent video in which we demonstrated our carbon nanotube yarn surviving an axe blow. In this new video, we see how well some of our yarns and films survive when an axe is thrown at them!

A big thank you to the folks at Class Axe Throwing for letting us perform this fun test at their range, and for helping us out with some of the throwing!

Today we want to share the following press release from Rice University in order to shine a spotlight on a newly-published paper about an exciting medical application of carbon nanotube fibers! This work was done by a collection of researchers at Rice University and the Texas Heart Institute in Houston, the University of Illinois at Chicago, and the Città della Speranza Pediatric Research Institute in Padua, Italy. Rice alumnus Colin Young, one of the co-authors on the paper, is currently a member of the DexMat team!

Scientists at Texas Heart Institute (THI) report they have used biocompatible fibers invented at Rice University in studies that showed sewing them directly into damaged tissue can restore electrical function to hearts. 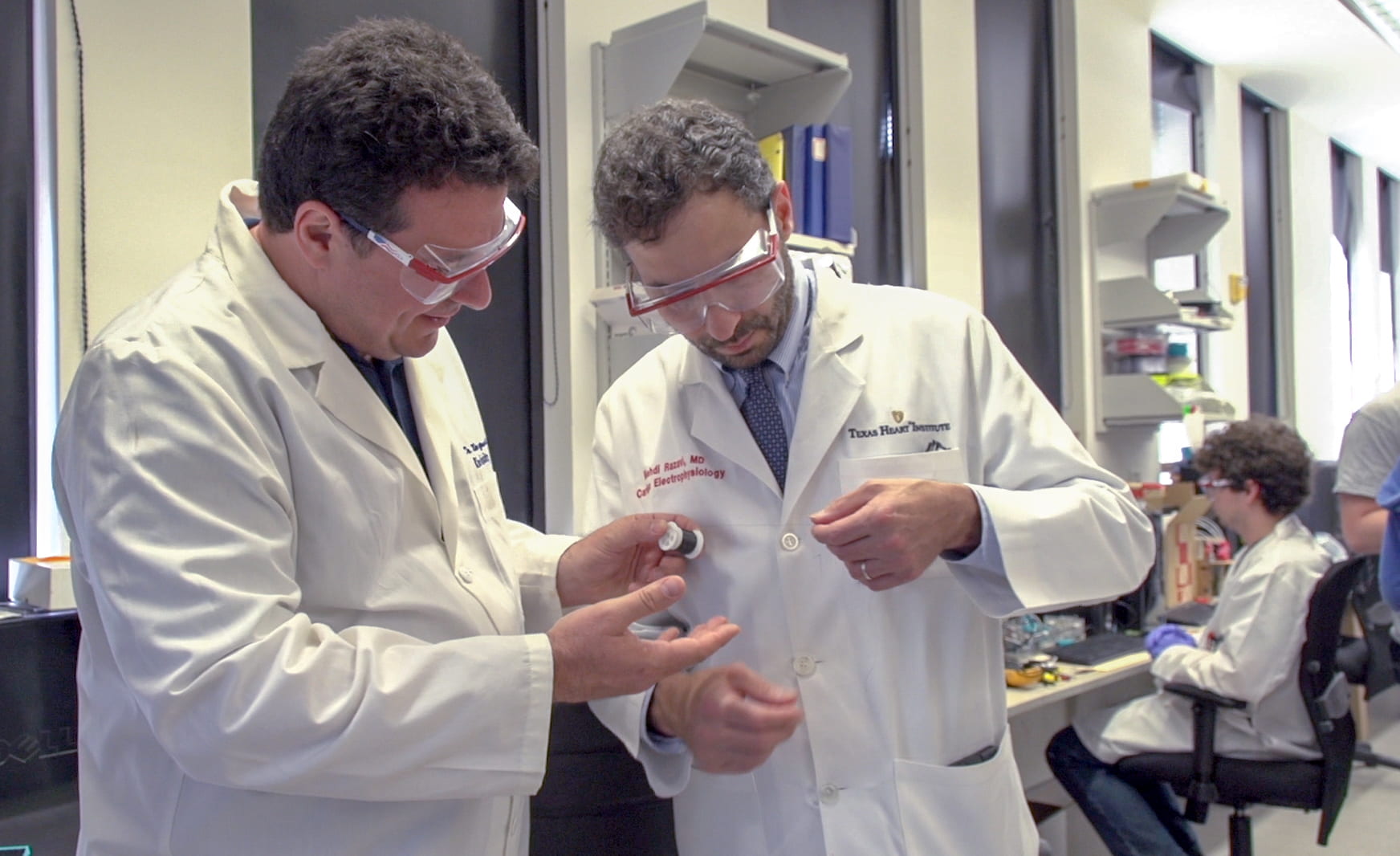 “Instead of shocking and defibrillating, we are actually correcting diseased conduction of the largest major pumping chamber of the heart by creating a bridge to bypass and conduct over a scarred area of a damaged heart,” said Dr. Mehdi Razavi, a cardiologist and director of Electrophysiology Clinical Research and Innovations at THI, who co-led the study with Rice chemical and biomolecular engineer Matteo Pasquali.

“Today there is no technology that treats the underlying cause of the No. 1 cause of sudden death, ventricular arrhythmias,” Razavi said. “These arrhythmias are caused by the disorganized firing of impulses from the heart’s lower chambers and are challenging to treat in patients after a heart attack or with scarred heart tissue due to such other conditions as congestive heart failure or dilated cardiomyopathy.”

Results of the studies on preclinical models appear as an open-access Editor’s Pick in the American Heart Association’s Circulation: Arrhythmia and Electrophysiology. The association helped fund the research with a 2015 grant.

The research springs from the pioneering 2013 invention by Pasquali’s lab of a method to make conductive fibers out of carbon nanotubes. The lab’s first threadlike fibers were a quarter of the width of a human hair, but contained tens of millions of microscopic nanotubes. The fibers are also being studied for electrical interfaces with the brain, for use in cochlear implants, as flexible antennas and for automotive and aerospace applications.

The experiments showed the nontoxic, polymer-coated fibers, with their ends stripped to serve as electrodes, were effective in restoring function during monthlong tests in large preclinical models as well as rodents, whether the initial conduction was slowed, severed or blocked, according to the researchers. The fibers served their purpose with or without the presence of a pacemaker, they found. 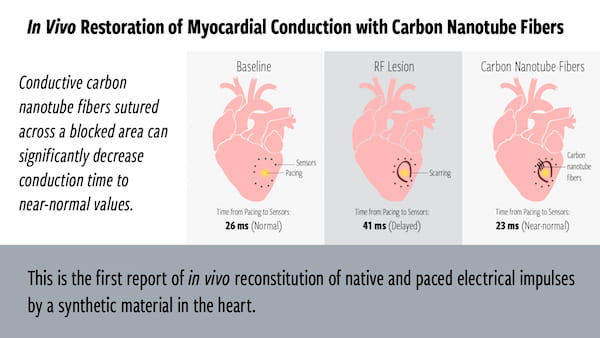 In the rodents, they wrote, conduction disappeared when the fibers were removed.

“The reestablishment of cardiac conduction with carbon nanotube fibers has the potential to revolutionize therapy for cardiac electrical disturbances, one of the most common causes of death in the United States,” said co-lead author Mark McCauley, who carried out many of the experiments as a postdoctoral fellow at THI. He is now an assistant professor of clinical medicine at the University of Illinois College of Medicine.

“Our experiments provided the first scientific support for using a synthetic material-based treatment rather than a drug to treat the leading cause of sudden death in the U.S. and many developing countries around the world,” Razavi added.

Many questions remain before the procedure can move toward human testing, Pasquali said. The researchers must establish a way to sew the fibers in place using a minimally invasive catheter, and make sure the fibers are strong and flexible enough to serve a constantly beating heart over the long term. He said they must also determine how long and wide fibers should be, precisely how much electricity they need to carry and how they would perform in the growing hearts of young patients. 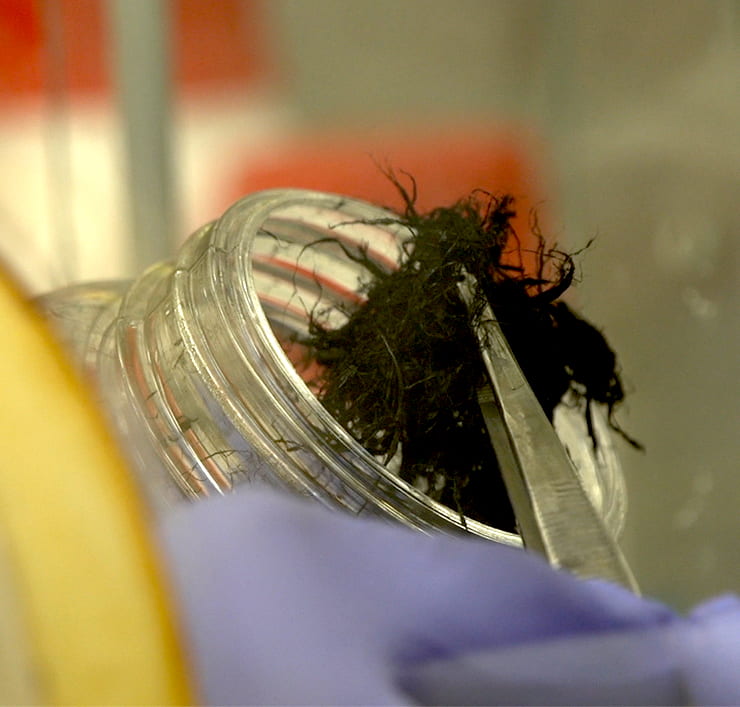 Researchers at Texas Heart Institute and Rice University have confirmed that flexible, conductive fibers made of carbon nanotubes can bridge damaged tissue to deliver electrical signals and keep hearts beating despite congestive heart failure or dilated cardiomyopathy or after a heart attack. Courtesy of the Texas Heart Institute

“Flexibility is important because the heart is continuously pulsating and moving, so anything that’s attached to the heart’s surface is going to be deformed and flexed,” said Pasquali, who has appointments at Rice’s Brown School of Engineering and Wiess School of Natural Sciences.

“Good interfacial contact is also critical to pick up and deliver the electrical signal,” he said. “In the past, multiple materials had to be combined to attain both electrical conductivity and effective contacts. These fibers have both properties built in by design, which greatly simplifies device construction and lowers risks of long-term failure due to delamination of multiple layers or coatings.”

Razavi noted that while there are many effective antiarrhythmic drugs available, they are often contraindicated in patients after a heart attack. “What is really needed therapeutically is to increase conduction,” he said. “Carbon nanotube fibers have the conductive properties of metal but are flexible enough to allow us to navigate and deliver energy to a very specific area of a delicate, damaged heart.”

Rice alumna Flavia Vitale, now an assistant professor of neurology and of physical medicine and rehabilitation at the University of Pennsylvania, and Stephen Yan, a graduate student at Rice, are co-lead authors of the paper.

Co-authors are Colin Young and Julia Coco of Rice; Brian Greet of THI and Baylor St. Luke’s Medical Center; Marco Orecchioni and Lucia Delogu of the Città della Speranza Pediatric Research Institute, Padua, Italy; Abdelmotagaly Elgalad, Mathews John, Doris Taylor and Luiz Sampaio, all of THI; and Srikanth Perike of the University of Illinois at Chicago. Pasquali is the A.J. Hartsook Professor of Chemical and Biomolecular Engineering, a professor of materials science and nanoengineering and of chemistry.

The American Heart Association, the Welch Foundation, the Air Force Office of Scientific Research, the National Institutes of Health and Louis Magne supported the research.

This news release can also be found online at https://www.texasheart.org/news/ and https://news.rice.edu/2019/05/29/damaged-hearts-rewired-with-nanotube-fibers/

In this video, we demonstrate an auxiliary cable made with carbon nanotube (CNT) conductors and shielding. The cable has two CNT yarn conductors that are insulated with a nylon braid and then shielded with a CNT fiber braid. The sound quality is great and highlights the tremendous potential for CNT materials in high-end audio cables!

This is the follow-up to our previous video, in which we demonstrated how our carbon nanotube yarn could be stitched into fabric using a conventional sewing machine. Here we are showing off the finished product: a DexMat t-shirt with blinking LEDs embedded into our lightning bolt logo!

We used an Arduino Gemma and a small battery pack (sewn into a pouch near the hem of the shirt) to create this LED effect. The electrical connections between the Arduino and the LEDs consist of 4 lengths of our high strength 130 micron carbon nanotube yarn. As Tyson demonstrates, this yarn can easily bend and fold with the shirt, and the zig-zag stitch allows it to stretch as well. It’s also extremely light and comfortable!

Check out the first part of this project here.

In this video we focus on one of our newly available products, a higher strength version of our 130 micron diameter carbon nanotube yarn.

DexMat is at the Interwire 2019 expo in Atlanta, GA, to talk about our carbon nanotube yarns and films. If you are in the area from May 14 – May 16, come by booth 154 and say hello!

In this video we introduce a high strength grade of 200 micron diameter CNT yarn to the catalog of DexMat yarn products! The high strength yarn has a breaking force of well over 3 kg and is about 50 % stronger than its predecessor. The tensile strength of this yarn is 1 GPa, and it is also very lightweight and highly flexible. Our high strength yarn is now available for purchase at the DexMat online store.

Here we show off the difference between Pi grams of copper wire and Pi grams of our carbon nanotube yarn.

In this video we provide a brief look at some of the experimental work we are doing to develop new products at DexMat. Here, we are using an electroplating process to coat our carbon nanotube yarn with a layer of copper. This process may allow us to create a useful hybrid material, combining the conductivity of metallic copper with the strength and durability of our lightweight carbon nanotube yarn.